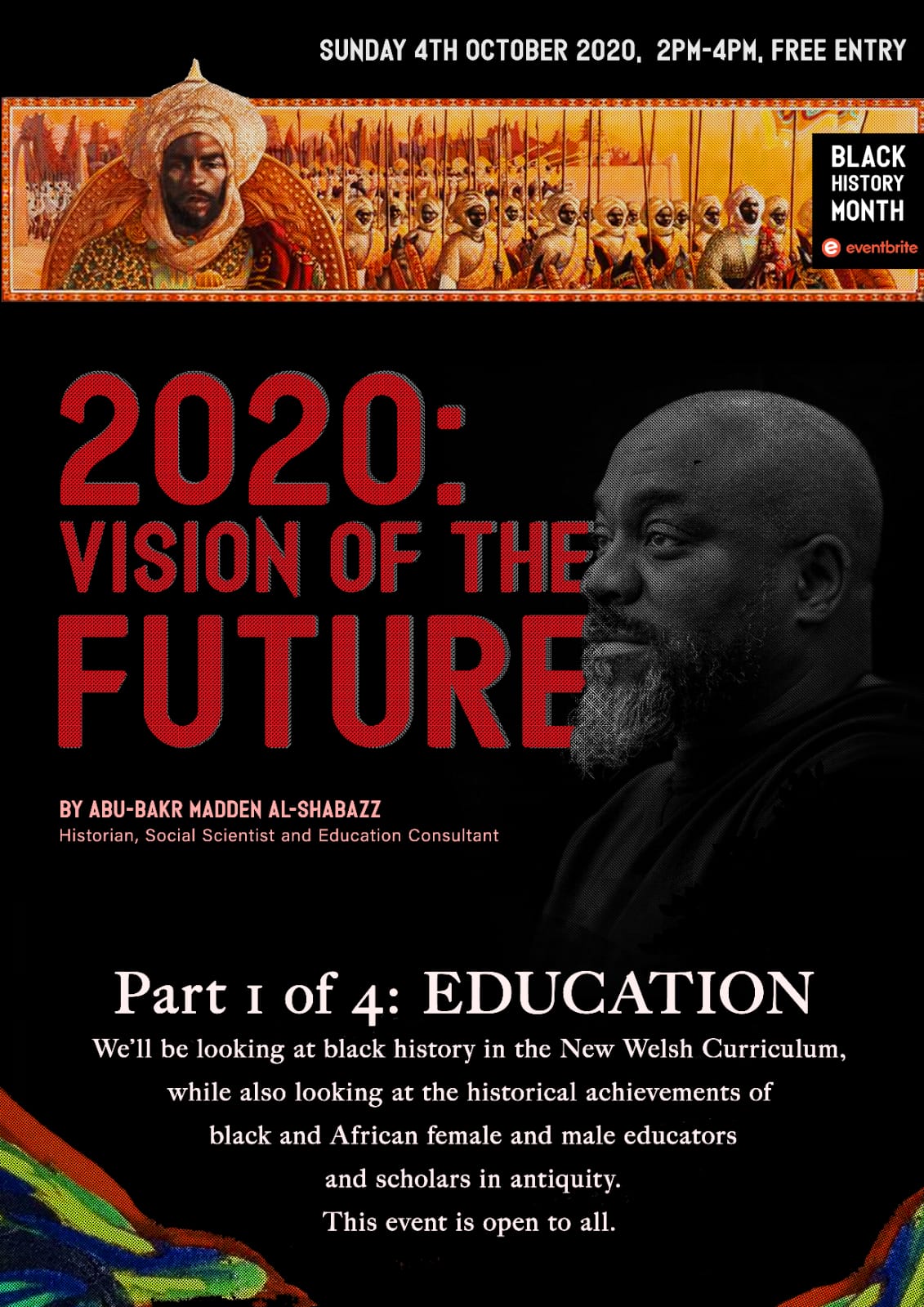 FREE 4 PART WORKSHOP. This BHM event will look at the experiences of blacks in: education, history, sociology and psychology. Open to all.

Sunday 4th October 2020. 2pm-4pm. Education: The first part of this workshop will examine the ancient historical achievements of black and African female and male educators, scholars and priests in Africa’s antiquity. The oldest university complex in the world dates back to Africa circa 2000 BCE which was called Ipet Isut (the most select of places) which housed over 80,000 students at its height from all over the African continent.This was long before there was a Persian, Roman and Grecian Empire. This will be followed by the Black and African Moors who civilised Europe during their Dark Ages when the lights of knowledge was switched off during this period. The Moors established 17 University complexes throughout Europe before the European tribes and nation established their own learning centres by themselves. The Moors were the first nation of people in Europe to establish an educational system which worked on the social equality of the sexes, long before the European nations slowly established this from the 1920s onward.

Part ll of this seminar will focus on the multicultural education method in which the new national curriculum in Wales and England must establish in order for both governments to prove their loyalty to Artcle 27 of the United Nations Human Rights Declaration to show their commitment to educational equity to all students/pupils irrespective of their age, gender, race, ethnicity and class dimensions. This seminar will look at as to how a multicultural curriculum, using black history as a case study, can establish like the modern curriculum as done for white students in British schools a 100% subject representation – reflected in every syllabus which then reinforces high levels of self esteem and confidence for white pupils in all British schools. When students see themselves and their people achieving high levels of status in the profesional fields of high sciences and mathamatics. This section will show the 500 years of struggle black people in the west have enocutered by their former colonial enslavers who forbid them from have an education, until slaves, former slaves and freed people rose up in order to change this social injustice of racism. Today in the USA and the UK black boys especailly are expelled more than any other ethnic group in Britain which shows that Britain and America have a propblem educating the black population now public education is supposed to be free for all.

Female Contribution in Africa (Part I)

This section will examine in greater detail the ancient historical and cultural elements of black civilisations. Sumer, Kemet (Egypt), Kush and Nubia were all black civilisations that were among the first in world history to organise, govern and calculate the time and space paradgims such as weeks, months, and years. We will also look at the very first in history black female rulers of these African states that rose up through the African matriarachal system and matrelineal ties such as Kemetic (Egyptian) females and Kushitic women; who were known as the Kentakes (Queen Mothers). Queen Candace fought and defeated Augustus Ceasar in upper Nubia with her army of Elephants when Rome decided to increase reginal control after invading Egypt in 30BCE. We also have another queen; this time from Kush who also stopped Alexander of Macedonia from penatrating upper Nubia 300 years earlier, who took on the most powerful man in antiquity who are never mentioned in classical hisotry. Is this the reason they are not mentioned due to them being black or female, or are they omitted from classical history due to being both balck females?

This section will examine the city states and empires of West Africa making the Empire of Mali larger than the Roman Empire. This session will focus more on the AD period and some of the most famous personalities to rise in these regions. We will also look at the trading routes and how West African mechadise became the most elegant and prized commodities in the ancient world.

Part l, will look at the out-of-Africa theory which has been established as a fact by archeology and DNA analysis. We will look at the Grimaldi (African) skulls found around Europe, Russia and Asia – establishing the African origins of culture, society, civilisation long before the emergence of the Asiatics, Indo-Europeans and Semitic groups.

Part ll, this section will examine the origin of racist philosophy in Europe by biologist, anthropologists, religious doctors, evolutionists and phrenologist. This section will look at the Indian Caste system showing the historical links to an ancient practice which dates back to at least 6,000 years old. It will then lead to the European colonial and enslavement period in which racial groups were constructed to create a hierarchical system based on skin colour and other phenotypes which we term race. Race, as an idea comes from the connotation meaning competition which means socially, politically and economically there is a race of winners and ultimately a race of losers which explains why black people in all white or fair coloured countries are at the bottom of the social ladder of these countries. Will explore the system of modern pigmentocracy and show how this structure is racially biased, unfair and justified by the dominante group in the 21st century.

This section will examine the psychology of prejudice and the impact of racial discrimination on the psyche of those who suffer more from this social practice. We will delve into the black and white doll studies constructed by Marmie and Kenneth Clark that was used in the Brown v Board of Education 1954 case to desegregate schools in North America. The doll studies actually presented psychological facts relating to black children having immense inferiority complexes based on racial biases engineered by the legal and political systems of the West which was influenced by European scholars such as Blumembach and Linnaeus from the 1700s onwards. We will look at the English speaking systems of race psychology and how they view black people through political and legal institutions which allow the police force to deliberately target blacks in a system of control and potrol rather then to serve and protect blacks in society.

This section will look at some of the most gruesome images of lynching – which were professional photographs made into postcads – sanctioned and supported by the federal government and local law enforcement . We will also venture into race perseptions in the West which allowed enslavement to exist for 500 years without any psychological remorse given to the victims and more given to those white enslavers who lost property and free labour.

We will end with looking at how Western psychology and psychiatry had its roots in the Trans-Atlantice enslavement system in diagnising slaves to justify their brutal treatment by white slave owners. We will discover some of the earliest psychological terms used to treat slaves who wanted freedom or rejected rape; as these two positions were considered by white merchants and slave owners as being insubordinattion to a request or command Psychology is a European science with much racial undertones in which modern students are totally unaware of as far its roots and origins are concerned. This section will open your mind to modern psychology and its origins.