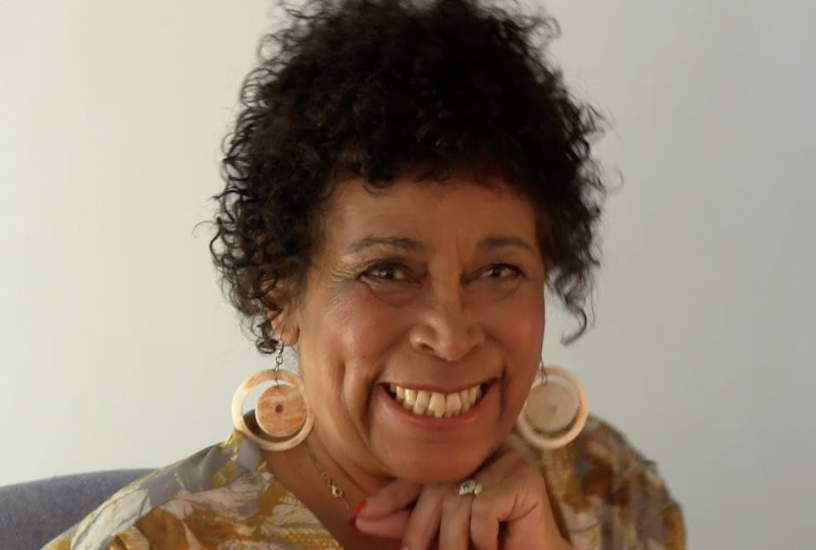 Patti Flynn was born Patricia Young in 1937 and sadly lost her short battle with cancer on 10 September 2020 aged 83 years.  A singer, performer, author, presenter, model, producer Patti was so much more. Patti was the youngest member of a mixed heritage family of eight from Cardiff’s multiracial docklands area known as Tiger Bay.

As a child Patti was surrounded by music and developed her love of jazz and performing by listening to the popular sounds of day such as Duke Ellington, Ella Fitzgerald, Sarah Vaughan and by watching her then mentor Vic Parker, the legendary jazz guitarist from Tiger Bay who encouraged Patti to sing from an early age.

During the 1960’s to 1980’s Patti honed her craft in the clubs and theatres around the UK and became a seasoned international cabaret artiste. One of the highlights of Patti’s career was appearing in the hit West End Show Bubbling Brown Sugar (as understudy to Elaine Delmar.)

During the mid-80s, Patti moved to Spain and became a respected music producer and radio presenter with her shows ‘Just for You’ & ‘Costa Nights’, however Patti never forgot her Tiger Bay roots and returned to Cardiff to create and perform her popular shows ‘Jazz Ladies of the Twentieth Century’ and ‘Trip Down Memory Lane’ that featured the music of the Great American Composers’, and the ‘Butetown Bay Divas’ with fellow performers Humie and Jacky Webbe.

Patti was a great supporter of the arts and worked tirelessly to ensure that the people behind the music were recognised, celebrated and remembered. Another highlight of Patti’s career was establishing the popular Butetown Bay Jazz Heritage Festival with her friend and colleague Humie Webbe which celebrates the music heritage of Tiger Bay and showcases up and coming musical talent.

As well as performing, Patti loved writing and was passionate about researching black history and culture. Her first book, in conjunction with a friend and University of Glamorgan photography student, ‘Fractured Horizon’ was published and launched by Butetown History and Arts Centre in 2003. Patti also received an invitation (in her seventies) to study at the prestigious Ruskin College in Oxford where she completed two research projects ‘From a Sea Side Town To Capital City’ (re Cardiff) and ‘Colouring History’ (Re: Putting famous women of colour back into history.)

Patti also championed the underdog and was an avid social campaigner and supporter of the British armed forces. One of her proudest moments was spearheading a 26 year campaign for a plaque to recognise the sacrifices of those from minority backgrounds who fought in the world wars. Patti felt people of colour had been “forgotten” and launched a campaign for a memorial. Patti’s older brother Sergeant Arthur Young served in the Royal Air Force and flew as a wireless operator with 106 Squadron and was killed in 1944, aged 21 when his Lancaster bomber crashed on its return to Salford in Lancashire after a mission.  Patti’s efforts were eventually rewarded in 2019 when a plaque was unveiled at the Welsh National War Memorial in Cardiff by the Welsh Government and British Armed forces senior officials. It now commemorates the sacrifices of all service men and women of colour from the commonwealth countries.

A much loved and respected member of the cultural arts and heritage community Patti shone brightest when she was entertaining others in full Diva flow! She will be remembered as an advocate and campaigner for Black History to be included on the school’s curriculum. In 2017 Patti was honoured as one of the founding members of the Black History Month movement in Wales and in 2019 was given an Ethnic Minority Welsh Women’s Lifetime Achievement Award.

Patti was proud of her Welsh-Jamaican heritage and her Tiger Bay roots.  She was working on her memoirs ‘Born Down My Tiger Bay’ which is a reflection of her childhood memories, and recorded the first instalment as an audio CD. Her story will continue through her family and friends who will contribute stories and their own reflections to complete the book.

She is now resting in peace with her beloved parents and with her siblings, Jocelyn, Arthur, Amanda and Wilmuth.

Patti will be laid to rest with her beloved son Sean.

We mourn her passing but celebrate her life as an inspirational, dynamic force of energy who will be missed by those were privileged to know and love her.  We send our heartfelt condolences to Patti’s family and salute her talents as a loving mother, campaigner, singer, performer, writer, author, promoter, presenter, activist, icon and original Bay Diva!

Have you got a great event happening in Wales? Want to feature it on BHMWales – Black History Month Wales’s online events calendar for free?